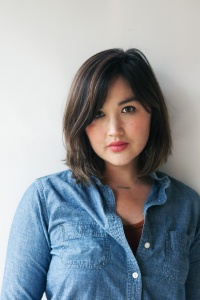 Heather Gallagher, a family and documentary photographer living in Austin, Texas, draws on her multilingual, biracial background to “tell other peoples’ stories [and] … capture their family in their true dynamic.”

Heather was born in Arlington, Virginia on December 16, 1985. She was raised by her parents Tom and Yen Gallagher, with her older brother Tommy in Mitchellville, Maryland. “I had a great childhood – you know?” Heather shared in an interview with the KODAheart team, “Looking back on it, I was really fortunate to have been exposed to so many different cultures, and so many different people and languages and all of that. It was really amazing.”

Yen and Tom met in Taipei in 1978. Yen’s family had moved to Taiwan from China when she was a child. She became deaf at age four and attended a deaf school in Taipei. Though her family did not sign, Yen acquired a mixture of Chinese and Taiwanese Sign Languages. Tom, a hearing white Marylander, was stationed in Taiwan. When Tom and Yen met, “My mom didn’t really know English, and my father didn’t know Chinese,” Heather said. They used “very, very basic” sign language to communicate. Their courtship continued for two years as Tom traveled with the US Navy for several years. They exchanged letters with one another throughout this period. Heather laughed as she recalled, “When they were corresponding via letters, my dad did not know that my mom was using … one of her four brothers to translate.” In 1980 they married and moved to to the United States.

The Gallagher household was a blend of cultures and languages, Heather shared. “At no one time in the house did we ever speak the same language.” After they settled in Maryland in 1980, Yen and Tom began taking American Sign Language classes together. Both Heather and Tommy traveled to Gallaudet with their parents and played in the halls while they had class, “I just have vivid memories of running around Gallaudet as a small child and interacting with the robust deaf community in Maryland and D.C.” she recalled. The family was also involved in the Greater Washington Asian Area Deaf Association (GWADA) and attended a deaf church. The family used “homesigns, a hybrid of Chinese/Taiwanese and American Sign Language, very basic English, drawings and polaroids” to communicate. In this diverse context, Heather remembered making sense of the mix of linguistic influences. “It wasn’t until I was much older and I encountered deaf people… who didn’t know my specific home environment, that I realized I was not … using the kind of sign language that the majority of deaf Americans are familiar with.”

Heather recalled that she was confronted with resolving some of the linguistic and cultural conflicts as a teenager. “It definitely had it’s moments where I was feeling really, kind of isolated… embarrassed and just kind of confused,” She explained. “Growing up – all those formative and teenage years… Where, in general you’re just questioning your identity and your place in the world… And you add to that, having such a different, such a unique, cultural upbringing… It wasn’t just being a koda. It was also being Chinese and white and growing up in a predominantly black community. I never felt like I fully belonged to any group of people, I felt like a visitor everywhere, even in my own skin.” When she was a teenager, Heather remembered “completely resisting anything that had to do with [her] mom…because of the normal reasons of being a fourteen year old girl and the contentious relationship with your mother.” It was around this time that older brother Tommy attended Koda Camp at Camp Mark Seven. Though he encouraged Heather to join him, she resisted. “In general, I think that I didn’t realize, how much unpacking I had to do as a koda… Looking back on it now, it’s so clear to me… I was just so afraid to open that door. You know?”

Looking back, Heather shared “I wish that I had embraced deaf culture and known about c/kodas when I was younger. Knew that it wasn’t just my brother and I … To know that it was something that was so much bigger. That it is such a big, huge, loving community that’s supportive. Because I don’t think that I realized that I needed the support until I found it, later in life.  And I resisted it for a bit. But then when I finally let myself, you know, feel it… it was literally life-changing.”

From a very early age, photography offered an outlet for the exploration of her own and other people’s stories, Heather explained. “Having grown up in such a unique home environment. I’ve just always been super fascinated with how other people see me and how other people live.” She was gifted her first camera, her father’s vintage Canon AE-1, when she was ten and she taught herself how to use it. “I bought an enlarger from Craigslist and made a makeshift darkroom in my parent’s dirt cellar (which is not an ideal environment for developing film!) and obsessively experimented with different techniques and styles of shooting and developing. “It was the first thing that gave me a sense of control and felt my own.” She began with self-portraiture and intimate portraits of friends and family, but quickly began getting paid work from local bands, artists, and neighborhood families to photograph them in their spaces.

After graduating high school, Heather attended the Pratt Institute in Brooklyn, New York. She studied Photography and Art History. Photography offered an outlet for the exploration of people’s stories, Heather explained.  In 2007, her senior thesis was an exploration of deaf-koda family life. The exhibit showcased photos of kodas at home. In order to capture the intimate family moments between parents and children, Heather traveled to the midwest and visited several families she had met as a camp counselor. She stayed with each family for several days at a time documenting their interactions together and alone. “In my efforts to highlight the unique culture of kodas, what I ended up with were images that showed just how normal their lives are. It was important for me to see that and capture it as proof. It was more of a self-exploration than anything else I realized.”

She attributes her artistic skill to her mother. “Seeing how my mom communicated with the world at large…  I became very interested in being able to communicate with people in a universal way… Growing up around sign language and the deaf community… I love to focus in on the micro-expressions, and the subtle movements of touching the small of someone’s back… It just speaks to so much. And that to me is a universal language.”

Soon after graduating from Pratt, Heather founded Heather Gallagher Photography to continue her work as a documentary and portrait photographer. Her work typically consists of documenting life events like weddings, birthday parties, and births, as well as portraits for businesses and families.  Her work has been featured on Huffington Post and in national publications such as Texas Monthly, SPIN magazine, and Time Out New York.

Heather has a passion for small moments. “The goal is to capture their family… in their true dynamic… without a lot of post-production… You can’t see yourself the way other people see you. I like to be able to show people that. Show them how much love is in the room in front of them, the little moments.”

Watch portions of our interview with Heather below:

Currently, Heather lives in Austin, Texas with her husband Tim and her son Lee, (“Who, I’m proud to say, is a strong signer!”) To see more of her work, visit her website, or follow her on facebook and Instagram.