A dedicated advocate for the deaf community, Elizabeth Criswell worked tirelessly to provide communication access to deaf people in the state of Texas. Since she was young she aimed to bring together both of her worlds, hearing and deaf. As an adult she worked tirelessly to achieve this goal. Among her accomplishments is the founding of the Deaf Action Center located in Dallas, Texas, where she spent countless hours of advocacy work for the deaf community. “She bridged the gap culturally between the hearing world and the world of deafness.. in a way that not many people have done, she had a foot in both worlds.” said her husband John Criswell. (Dallas News)

Criswell was born in Houston, Texas on October, 27, 1938 to Deaf parents, Leon Myatt and Selma Fitz. She was exposed to sign language from birth and learned to communicate in American Sign Language before learning to speak. Criswell began breaking communication barriers at the young age of nine, often interpreting Sunday services at church. As her signing skills developed, so did her compassion for the Deaf community.

She brought both of these capacities with her to Dallas when she accepted a position as director of adult services at Callier Hearing and Speech Center (now known as the Callier Center for Communication Disorders) in 1958. During her time in Dallas, she also served as an “on-call” interpreter, taking calls 24 hours a day to assist with providing valuable communication in emergency contexts, including law enforcement, medical, and legal situations. (Dallas News) 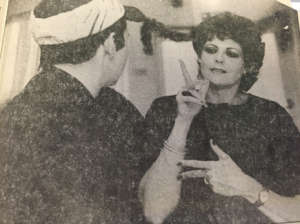 It was her work in the interpreting field that contributed to her next achievement; Elizabeth worked closely with 24 other professionals and founded the Texas Society of Interpreters for the Deaf in 1963. It is a non-profit organization established to focus on not only the development but the strengthening of the interpreting profession. As a Certified Legal interpreter, highly sought after for medical and mental health court cases, she contributed her experiences to the board. (Resland Tribute)

This commitment to access also led Criswell to accept a position interpreting morning newscasts at WFAA-TV, a local television channel in Dallas. On Sundays, residents could also tune in to KDFW-TV, an alternate station, to watch her interpret the services of Highland Park United Methodist Church. She met John Criswell, a news anchor for WFAA-TV, at the station and the two married in 1974.

One year later, Criswell left the Callier Center and to establish the Deaf Action Center, an organization committed to supporting and empowering Deaf people in North Texas. In this capacity, she began to focus her attention on legislation, “seeing to it that laws got passed to protect the rights of deaf people, who were accused or in prison,” explained her husband.

Her husband remembered that many people mistook Criswell to be deaf, though her natural ability to work within the deaf community was attributed to her deaf parents. “We’d take a car trip someplace and she would doze in the front seat.. she would talk to herself in sign language,” shared her husband. “She would dream in sign language, I would wake up in the night and she would be signing.” (Dallas News)

From interpreting church service as a little girl to strengthening the interpreting field and aiding in the passage of legislation for deaf rights, Elizabeth Criswell continually fought to remove barriers that faced the deaf community. Her impact and legacy as an advocate will be felt for years to come.