Skip to content
College basketball coach, Yolonzo “Yo” Moore, II, is proud of his heritage. In an interview with the KODAheart team, Yo explained, “I have a very big, funny, interracial family. My mother being white and my father being black, I always joke around and tell people that I have the best of both worlds.”

Yo was raised in a blended, bilingual household. His father, Yolonzo, and mother, Tammy Jerrett, and sister, Viola, are deaf and his siblings, Zola, Taylyne, Adola, and Keyshia, are kodas. Yo recalled in an interview with the Hartford Courant that language access was something his father emphasized in the home; “The biggest thing my dad got on us hearing kids about was, we weren’t allowed to sit in the house and just talk. We would have to sign because you can’t have one kid feeling left out.” Yo shared with KODAheart that he always strived to be “a great role model for [his] younger siblings.”

Yo was born in Washington, D.C. in 1993, but spent the majority of his life in Austin, Texas where his father had a job at the Texas School for the Deaf. “My dad was the football coach at Texas School for the Deaf when I was younger so I was always the ball boy at all of the football games. Just being able to hang around the football team was one of my most memorable childhood memories… I remember being with him every day and being around the players,” Moore said. “I looked up to them so much and I still keep in touch with many of them.” (Hartford Courant)

Athletics would feature prominently in his own life. Yo went on to become a standout basketball player at Akins High School in Austin. His senior year, Yo averaged 22 points, 6 rebounds, 3 assists, and 3 and a half steals per game, statistics impressive enough to capture the attention of John Gallagher, the head coach at the University of Hartford. At Hartford, Yo thrived. In his four year career, he started 123 of a possible 124 games; amassing over 1,000 points, over 300 rebounds, and nearly 400 assists. Yo believes having “deaf parents helped [his] communication skills both on and off the court” and his coach agreed, “It presents itself with his communications skills being so great.” (Hartford Courant) 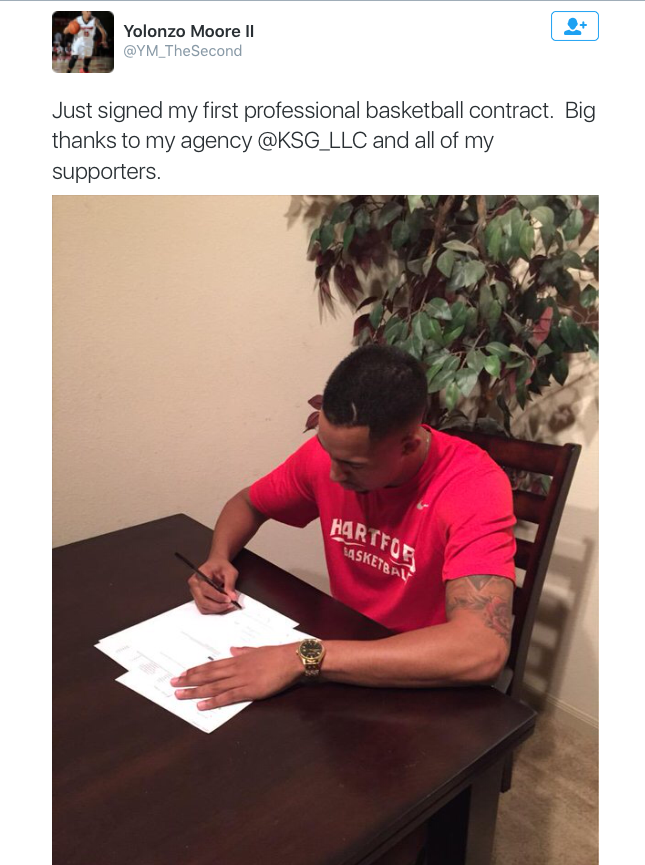 Even after moving on to opportunities to play in Germany and Spain, Yo has emphasized that his background continues to shape his experience. “Growing up and being around the deaf community for so long, I have always been identified as a Coda… It’s very special because we are a unique group of people. Nobody will ever understand how we grew up with deaf parents as hearing kids. Nobody will understand what it’s like to make phone calls for your parents, order food for your parents, or being as loud as we want because our parents can’t hear… Yes, we may have had challenges but at the end of the day we’re one of a kind and we are very proud of it”.

While his coda identity played a part in shaping his background, Moore now looks to help shape the experiences of the young men he will be coaching. When asked about his new position, Moore replied “I am a Player Development coach at Texas A&M Commerce, which is a Division 2 school in the Lone Star Conference. I’ve been around basketball all of my life and it’s something that I have a true passion for. Basketball has never been work for me, so I decided to take up coaching in order to give everything that I’ve learned through all of my years playing, back to players who are trying to excel in hooping.” So many of Moore’s coaches helped shape who he is, which is why coaching was something Yo knew he wanted to do after his playing career brought him back to the states. We here at KODAheart wish Coach Moore and his team the best of luck this upcoming season and beyond!