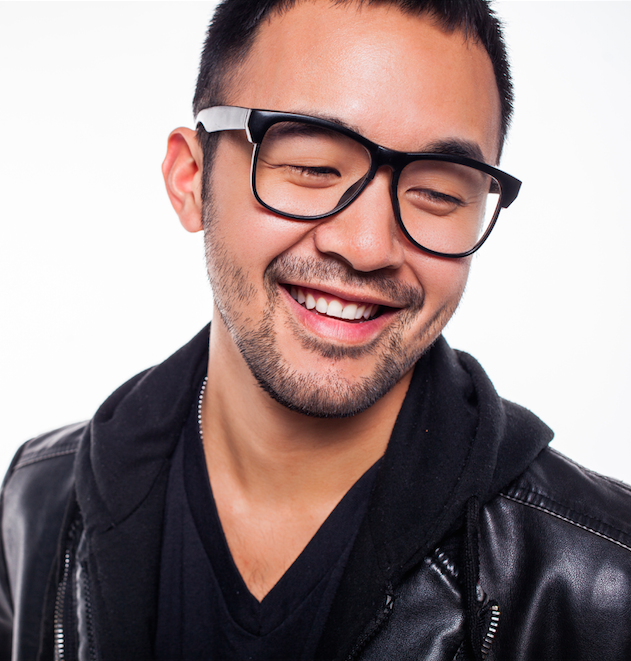 As a singer/songwriter, music has played an important role in Nate Tao’s life. His appearance on American Idol Season 12 garnered him international attention. Although he did not win the competition, his “unassuming” persona won him a number of fans and led to the release of his self-titled EP on iTunes. Recently Nate sat down with the KODAheart team to give us an update on what life has been like since American Idol and shared with us what it is like to be a musical coda.

His journey to stardom began in Reston, Virginia (right outside of DC) where Nate grew up with two older siblings, Beth and Alex (also codas). His parents, Anni and Mark, emigrated to the US from Taiwan in the 1980s. Anni works as a software engineer at Northrop Grumman, and Mark taught science at the Model Secondary School for the Deaf in Washington, DC. Both Mark and Anni are heavily involved with the Greater Washington Asian Deaf Association, a non-profit organization that promotes connection, education, and the well-being of Deaf Asians within the Washington DC area. Nate explained, “My parents both attended Gallaudet University and I think that was just one of the many ways they were able to meet so many deaf people and build friendships and connections with such a wide range of people. My parents are still currently involved with GWADA to this day.”

Nate described his childhood with a smile on his face, “The dynamic was crazy but so much fun. I have really fond memories growing up… we used ASL with some Signed English [at home]. Only my parents know Taiwanese Sign Language. ASL and TSL are not alike at all. When my parents want to chat privately they switch to TSL. Very sneaky!” Nate emphasized that being in a deaf and koda family was normal for him. He remembered “not knowing that what we had was different, or not the normal experience exactly. People always ask ‘what’s it like?’ Well, this is all I know. This is all I have known.”

It was during his teenage years that Nate had his first koda experience. In 2002, Nate reluctantly joined his brother at KODA Camp. He explained that for much of his childhood he did not identify as a koda, he simply didn’t have the language to describe himself or his family. “The first time I heard the word coda, I think I was 11 or 12, and it was right before I heard of KODA camp.” Anni and Mark had learned about the camp from a family friend and signed both boys up for the following summer.

Nate describes his experience there as transformative. “When I got to KODA camp it was definitely a big ‘AHA!’ moment. There are other people like you and they understand completely what your experience is and I never had really thought about that or understood that. That was a really great moment for me.”

Nate returned to KODA Camp for two consecutive summers. He credits the time spent at camp with shaping his sense of place in the world. “It impacted my identity in such an amazing way. I always tell other people, ‘it’s kinda like that part of you that you didn’t know you needed or didn’t know existed.’ Because before then I didn’t think I had a coda portion of myself. It was really great to rediscover and reclaim that, and share experiences with others who also understand. You just really are discovering every part of yourself, including your coda part and then you’re bringing them to light and being proud of them and making them known and I think that’s really important.” That self discovery led to changes in how he viewed himself and his family, “I gained a stronger sense of identity and a valued sense of validation and acceptance of myself and how I fit in with my family and the world. I also gained a stronger appreciation for my family, especially my parents.”

At home, Nate recalled that his interest in music was encouraged by his parents, they enrolled each of their children in piano lessons, “My grandmother had always wanted my mom to learn to play the piano but that didn’t happen. So growing up, I think my mom wanted us to learn to play. I’m thankful she did because it gave me a great ear.”  Nate began lessons at age five, but his passion for music blossomed when he was in his teens. During his high school career at Herndon High, his love for music grew, participating in musicals and choir groups.

After he graduated from High School, Nate followed his passion to Ithaca College where he studied music and participated in acappella groups on campus. His parents were supportive of his pursuits. They often traveled to upstate New York to watch Nate perform with Ithacappella and Hyannis Sound. However, Anni shared in a Washington post article, that being a fan was sometimes a challenge, “I must admit that we always showed up at the beginning. During the break, we met him, gave him flowers and then we sneaked out and went home. It was hard for us to sit for two hours and not understand the performance. Nate understood.” Despite the difficulty of participating in Nate’s musical performances, his parents frequently demonstrated their support. His father, Mark, waited with him during the first round of American Idol and their interview was featured on the broadcast.

“I got so much support from the Deaf community!”

Since his appearance on the show, Nate has continued to perform around the world. Gigs have taken him from Los Angeles to Singapore. Most recently, however, he spent three months not performing but studying. He traveled to Taiwan where he studied Chinese. “Growing up, I never learned Chinese since there wasn’t anyone to learn from or practice with. I’d already been to Taiwan plenty of times to visit family but I decided that I wanted to go and learn.” Nate was the only American in the class of eight students from varying backgrounds. “I stayed with my aunt who is deaf so I definitely picked up some TSL! It’s interesting because it’s not at all similar to ASL.” Reflecting on his experience overseas, Nate is reminded of how different his life would be if he wasn’t a coda, “The onlymain reason my parents moved to the US was because in Taiwan education and opportunities for the deaf were not good. Except for one aunt, all of my relatives have remained in Taiwan. It’s such a crazy thing for me to think about.” Although 3 months is not enough time to obtain fluency, he practices by texting with his parents in the language as well as writing faxes to his grandmother, “I’m actually going back in a couple weeks so I really need to brush up!”

So what can we expect next from Nate Tao? “You can expect something, maybe in the next 6 months.” Whether it is songwriting for other performers or taking the stage himself, we look forward to what Nate does next!

To keep up to date on his activities or to watch him perform in person, check out his website: http://natetao.com/ and follow him on twitter. Watch his previous performances and awesome collaborations on his youtube channel or listen to his tracks on soundcloud.